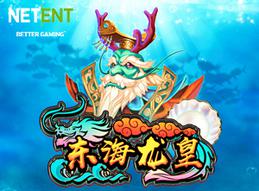 It seems like the Asian theme never goes out of style. But this time, NetEnt is presenting it with quite a twist in its latest edition - East Sea Dragon King slot.

This release is inviting players to dive into the sea to seek out the long-lost treasure. Still, this isn’t the adventure under the ocean as you have seen before. It is based on Asian mythology, so expect the unique mix of symbols.

With quite high winning potential...

…the hidden wealth might be closer than you think since the slot is rich with special features. Expanding Wilds, Re-Spins and Cluster Pays™ are just some of the incentives that might help players on their way to big wins.

Incredibly sharp theme-based graphics combined with the catchy background music will offer the player an unforgettable gaming experience. That won’t change when you switch to any portable gadget. Due to excellent optimization, this game is available in its full glory on mobile casinos as well.

Are You Ready to Swim on the Waves of Special Features?

NetEnt is famous as a provider who likes to spice the gameplay with innovative features. This title isn’t any different since it comes with nice incentives and bonus round.

From expanding Wilds to Re-Spins and Cluster Pays, this game with 5x3 grid components is simple and yet very engaging.

Regarding special features, it contains:

Just One in Series of New Titles We Can Expect

The month of April is going to be filled with new slots by this provider, judging by the “upcoming games” section on its official website.

East Sea Dragon King is scheduled for release on April 15 …

…and just a week after that we can expect the Gorilla Kingdom launch on April 23. This game takes the players on dry land and into the jungle adventure pawed with big winning potential and stunning visuals.

As the month closes to its end, the Super Striker slot is announced for release on April 29. As a football-themed title, it aims to grab the attention of sports fans who also enjoy the dynamic special features.

The developer has more titles planned for the following months, and East Sea Dragon King slot is a great way to honor the sunny spring days and remind us of the summer ahead. Here the Asian theme is presented in a completely new light and combined with special features present fun game that different types of players can enjoy.