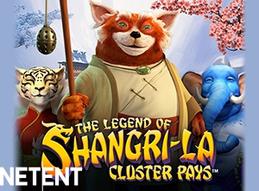 NetEnt players appreciate innovation and originality as well as variations on a winning theme. Today marks the launch of a game that ticks all the boxes with the developer's newest installment in the Cluster Pays™ series - The Legend of Shangri-La. This 6 reel, 5 position "video slot" presents a game world highlighted by the green valleys and cherry blossoms of paradise with music that draws players in and bathes them in the magical and spiritual world of the monk and the dragon spirit.

The game's mechanics excite inner senses with random wilds, sticky re-spins, free spins and nudge reels as players venture to the icy top of a mountain to witness and experience a fierce battle. During free spins the spirit of the dragon can fly across the screen and undo the good works of the monk, shattering symbols to make them useless. In regular gameplay, the monk, who appears to be a Himalayan red panda, affects the reels with symbol changes while the dragon sends green wisps of energy from off the screen to do the same.

Chief Product Officer at NetEnt, Simon Hammon, said: "This latest installment of the Cluster Pays series, The Legend of Shangri-La, is evidence that our launches continue to go from strength-to-strength.

"The game was designed to bring the fairytale to life and we are sure our players will enjoy this vibrant and spiritual world and its unique twists and turns."

Whether played on mobile or desktop, the graphics are well rendered with 3D light and shadow animations of the characters. Built and delivered in HTML5 the spiritual world comes alive at players' fingertips and offers a worthy adventure in the pursuit of a 100,000 coin jackpot.

The game follows the company's late August release of emojiplanet developed specifically for mobile but executed well on desktop as well. That game was released following July's highly successful release of the Emoji Movie and also used Cluster Pays mechanics. The first game of the series, Aloha - Cluster Pays was released March 24, 2016.