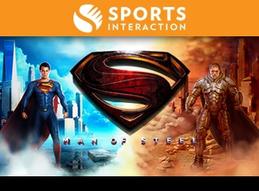 Mohawk Online's Sportsinteraction.com has announced that they will be the first regulated Canadian online casino to launch DC Super Hero-branded casino slots. Playtech has exclusive license to use the Warner Bros/DC Entertainment content and has chosen Mohawk Online Limited to debut them. Sportsinteraction already carries a variety of Playtech slots including branded and unbranded titles.

The eGaming site is wholly owned by the Mohawk Council of Kahnawake and licensed and regulated by the Kahnawake Gaming Commission as well as the Jersey Gambling Commission of the Channel Islands.

The premium portfolio includes the Batman television series from the 1960s as well as Superman and Superman II movie content, Man of Steel (2013) and Green Lantern (2001) among other content. Playtech was able to extend their exclusive licensing agreement in February and plans to produce more games based on WB/DC content such as Batman v Superman: Dawn of Justice, Suicide Squad, and The Dark Knight Trilogy among others.

Joseph Norton, Grand Chief of the Mohawk Council of Kahnawake said: "This is truly a landmark achievement for Mohawk Online, it is exciting to occupy the same stage as international corporations such as Playtech and Warner Bros. Pictures," according to an earlier release from Mohawk Online.

All of the games will be linked to DC Super Heroes tired jackpots. A little under 1% of each bet placed on the games goes into the progressive jackpots. Playtech seeds them with 100 for the Mini, 1,000 for the Minor, 10,000 for the Major and 200,000 for the Grand Jackpot. Prizes continue to grow until they are won and then they are reseeded. Rather than being symbol-driven, the jackpot chance is triggered randomly and always awards a win. The more energy balls that are revealed, the higher the prize. When all appear the jackpot is won.

Mohawk Online Limited CEO, Dean Montour mentioned how delighted they were to be the first to offer the games in Canada. He added, "As a First Nation-owned socio-economic initiative and recreational gaming site operating some of the lowest deposit and bet limits in Canada, responsible gaming is central to how we operate. As the world’s leading supplier of casino games, Playtech is an ideal partner – a reputable, publicly listed UK company that is highly-regulated and trusted the world over, with its branded content instantly recognizable and great fun to play."