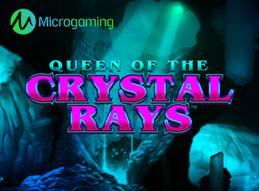 Developer and casino content supplier, Microgaming, is releasing yet another third-party produced slot game in July.

The game in question this time is a mystical and curious journey into the world of magic crystals.

But these magic crystals in Queen of the Solar Rays, developed by Crazy Tooth Studios, don’t just shimmer and shine.

They are gateways to shiny wilds, multipliers and bonus features that expand the game board to increase the number of possible ways to win.

Developer, Crazy Tooth, has pulled out all the stops in this production for Microgaming and made a graphically stunning game.

There is even a pretty long animated intro that perfectly sets the mood for an enigmatic time spent uncovering ancient ruins and the arcane artefacts therein.

When it comes to the features…

…they are of course crystal-themed as well.

During any spin, the Crystal Ray feature may be activated during which the playing area doubles from 6x4 to 6x8 and the number of active paylines from 25 to 50.

And that isn’t all, as the crystal rays bounce dynamically around the reels they also turn anything in their path into a wild symbol.

Coupled with the slot’s Any Adjacent Wins gimmick, where winning combinations are possible in any direction, there’s potential for a whole lot of fun.

In the Queen of the Crystal Rays Bonus, which occurs when three or more scatter symbols land, the board expands once again but is this time filled with cash prizes and multipliers.

The crystal rays now activate every spin and award any prizes in their path.

Ben Hoffman, President at Crazy Tooth, stated the company couldn’t wait for the players to experience the magic of the game reflected in its entrancing soundtrack and striking graphics.

“Following the release of Arctic Valor, Crazy Tooth Studio’s fantasy-filled title is sure to receive a warm reception, as players discover an enchanted world immersed in colorful visuals and engaging features,” concluded James Buchanan, Director of Global Operations at Microgaming.

The leading developer was very busy in July with many different games being announced and unveiled.

They collaborated with Rabcat for Sherlock of London, a game set in Victorian London putting the players in the shoes of the most famous detective in the world.

The company has also announced a long-awaited continuation of the adventures of Jungle Jim, Jungle Jim and the Lost Sphinx, developed by Stormcraft Studios and set to release sometime in November this year.

Microgaming has also unveiled Magic of Sahara, set in the largest desert in the world and inspired by stories of Arabian Nights.

The developer also revamped their famous Break Awayslot as Break Away Deluxe, keeping all of the hockey-themed charms intact but adding some new and modern features.