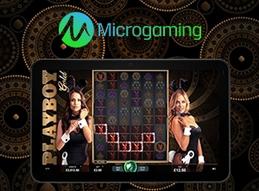 As the major providers add more branded games to their portfolios, Microgaming is leading the way again with Playboy™ Gold. The game, slated for release on 7 March 2018, follows the wildly popular 243-ways Playboy slot released five years ago and strengthens the companies' brand partnership which includes Playboy Live Dealer which launched in February 2013.

The new game will be played on 6 reels with plenty of base game and bonus round features to keep players entertained. Playboy Gold was developed by Triple Edge Studios, a game design house whose head of game design has over 60 game method patents and started her design career at IGT in 2005. The studio will officially be launched at ICE in February and will be creating content exclusively for Microgaming and their Quickfire platform operators.

Playboy’s Senior Vice President of Gaming and Location Based Entertainment, Valerie Golson said: "We’re thrilled to be working with Microgaming to expand our partnership and introduce a new gaming experience for players around the world," according to a press release on the Microgaming website.

Playboy is one of the most recognized brands in the world with over 16 million Facebook 'likes' and global awareness of the name and symbol in the high nineties.

Microgaming Games Publisher, David Reynolds commented: "They are one of the most recognised and popular consumer brands in the world and Triple Edge Studios has worked tirelessly to bring the brand to life in Playboy Gold. The game is hosted by Playmates Raquel and Audrey and delivers non-stop action. We are excited for the game’s launch and to be unveiling the title at the industry’s biggest trade show!"

Where to Find Playboy Gold

Stand-alone Microgaming casinos that will be carrying the new game include Casino Action and Blackjack Ballroom. A small sampling of Quickfire partners that are very likely to pick it up right away include Mr Green, Guts, and NextCasino.