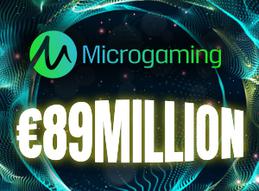 Microgaming’s progressive jackpot network, widely understood to be the largest in the world, has paid out an astonishing €89,879,343 in the first six months of 2019.

The network consists of 1,150,559 jackpots and has allowed 8 very lucky winners to become multimillionaires overnight.

They took home seven and eight-figure Microgaming jackpots, which is more than €43 million in winnings. A further 380 players were less lucky but still got payouts of €10,000 or more.

The immense payout was won through Mega Moolah, the famous five-reel, 25 lines, and African-themed slot.

…this is a slot featuring four different tiers of jackpots activated randomly during play. The feature that blew punters’ minds back when it was released is that the Mega Jackpot starts at $1,000,000!

John Coleman, CEO at Microgaming, comments on the state of the jackpot network:

“2019 is gearing up to be a great year for Microgaming’s progressive jackpot network, with total lifetime payouts fast approaching the €1.1 billion mark. Congratulations to all winning players on the network, which remains the largest in the industry and features the record-breaking Mega Moolah progressive slot. We look forward to hosting more life-changing wins in the second half of the year.”

The largest-ever win on the brand’s network remains the record-breaking €18,915,872.81 which was paid out last year, 29th September 2018 at the Grand Mondial Casino through – you guessed it – Mega Moolah.

The leading game supplier has stated in their press release that, to date, 74 millionaires were made on their progressive jackpot network.

More on the Supplier:

A game developer, and a supplier to leading casino operators worldwide. Microgaming developed the first truly online casino in 1994 and the first mobile casino software in 2004.

The products include poker, bingo, sportsbook, live dealer, video slots, and more. Launching new titles constantly on desktop and mobile they are known for their licensed games like Jurassic Park as well as original offerings.