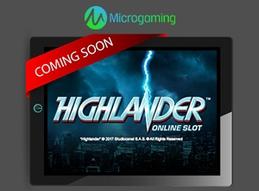 Microgaming, the company that developed the first full spectrum casino in the early 1990s, has announced a licensing agreement that will see them release a video slot based on the cult classic, Highlander. The 243 ways game is slated to be released on December 6, 2017.

Creative Licensing Corporation brokered the deal between Microgaming and the current license owner, StudioCanal Group. Just last year, the French film production and distribution company which owns the world's 3rd largest film library with over 6,000 films and rights to more than 30 television series, announced the 30th anniversary 4K restoration re-release of the 1986 film.

There can be only one

In the original movie, immortal swordsmen battle it out from ancient Scottish times through New York in the 1980's to win the "final prize". The film sparked a franchise including sequel films and spin-offs for television. Its tagline or catchphrase of, "There can be only one", has become immortal itself through the franchise. Queen's 1986 album "A Kind of Magic" includes several songs from the original film.

Games Publisher at Microgaming, David Reynolds said in a comment to the media Friday: "Highlander is seen as one of the great cult hits of the 80s. With its action-packed storyline and hefty rock inspired composition, it is a fantastic brand for an online slot. The game studio is busy completing the slot that captures all of the movie magic. The game’s features will incorporate the historical Scottish Highlands and gritty New York City, with a classic movie poster art style and blistering guitar tracks."

Stephanie Kupperman of Creative Licensing spoke of the many iconic characters from the film, including Christopher Lambert (Connor MacLeod), Roxanne Hart  (Brenda Wyatt) and Clancy Brown (The Kurgan) and promised they would appear in the new slot game.

"We think fans are really going to enjoy revisiting this epic story, and seeing their favorite heroes and villains in game format," said Kupperman.

Players in regulated jurisdictions will be able to find Highlander on release day at Guts, Mr Green, and other casinos with Microgaming content.

Microgaming Press Release, “There can be only one” – Microgaming signs licensing agreement for Highlander 09-29-2017