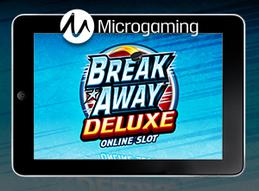 Developer and casino supplier, Microgaming, has announced a new video slot going live based on their previous successful and beloved, Break Away.

Break Away Deluxe is a hockey-themed game like its predecessor sporting a trading card-based aesthetic and is sure to bring punters back to the time when they traded these little cardboard treasures with their friends in the playground.

This sequel refinement comes from the studio Stormcraft, the makers of acclaimed games like Fortunium, Dragon Shard and the upcoming Jungle Jim and the Lost Sphinx.

The game takes the action-packed gameplay of the previous iteration and supercharges it with totally new and exciting features.

The high-volatility but mobile-friendly 5x5 reels of Break Away Deluxe offer punters the choice of active paylines. Choosing between 18, 38, 68, or 88 lines lets players tailor the experience to their liking.

In addition to the selectable lines…

…this game features tumbling symbols that clear away when they form a winning combination creating the chance for another win.

The Smashing Wilds feature is still here from the previous game. Hockey players can appear and turn reels 2,3, or 4 wild for a guaranteed win. The reel stays wild for subsequent respins until no more winning combinations are formed.

Collecting the scatter symbols will let players access the extra spins feature with Growing Wilds, where reels two to five are super stacked with the stack growing by one wild on every spin.

Multipliers are active too…

…with every consecutive tumble awarding increasing values up to 8x!

“Break Away Deluxe takes all the action of the phenomenally popular original slot, layering it up with even more exciting and rewarding features. Stormcraft Studios have successfully created a high volatility slot experience, with excellent win potential up to 3,200x the initial bet. We’re looking forward to seeing fans and new players alike immerse themselves in this engrossing update of a true Microgaming classic.”

Terence Igesund, Executive Producer at Stormcraft said that the studio set out to enhance the user experience with more choices for the player and the excitement of increasing the volatility. He further added that they believe “successful sequels are not reinventions but carefully considered extensions.”

The company serves as a supplier of award-winning software to casino operators all over the world. Developing the first truly online casino in 1994, the brand went on to also make the first mobile casino in 2004.

Since then, it has published many acclaimed first-party slots as well as licensed properties like Jurassic World, and collaborations with third-party developers on games such as Magic of Sahara and Sherlock of London.

The company maintains the largest progressive jackpot network in the world, which has paid out more than 1 billion euros to date.