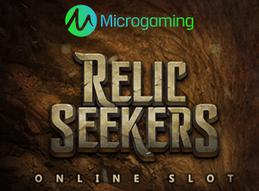 Game developer and casino supplier, Microgaming, is keeping up its collaborative streak with another release by a third-party studio.

This time, punters will be taken on a journey deep within Dragon’s Vein to seek fame and fortune as explorers in the form of a five-reel, 25-payline online slot.

Developer, Pulse 8, has been tasked by Microgaming to create Asian-inspired content and they have delivered in this title inspired by Asian myths and ancient architecture in which adventurers explore mysterious secrets.

The game is set in an underground tomb where intrepid adventurers, a professor Morgan, a young Free Man, and Nora are engaged in exploring the vast Dragon’s Vein.

How do they get there? With Rolling Reels, of course.

Microgaming loves tumbling slots and this is another one of them after Break Away Deluxe which came out recently and also has this feature. That means when there’s a winning combination the symbols disappear and new ones tumble from the top creating opportunities for new wins.

But That’s Not All

Tumbling triggers another feature, called Symbol Turn Wild; and that name is very appropriate because that’s exactly what happens.

…and that’s not even the ultimate treasure. The chance to get that comes when three scatter symbols appear and punters gain entry into the chamber of extra spins.

…the punters and the explorers collect keys to finally open the main chamber. On the road, 3 keys award two more extra spins and 6 keys give another two as well as a 2x multiplier for the remainder of the mode.

Collecting tokens is also what punters are doing in the July release by this developer called Magic of Sahara.

“Offering an immersive playing experience with captivating visuals and features, Relic Seekers sets the bar high for future releases from Pulse 8 Studios, who we are delighted to be working with on an exclusive basis.”

It’s a busy quarter for a buys company as Microgaming has had a packed release schedule.

Some of the recently released titles include Queen of Crystal Rays, a game set in an enchanted forest featuring a playing grid that expands when certain conditions are met and the Any Adjacent Wins special rule where winning combinations only need three or more same symbols adjacent regardless of direction.

And who can forget Tiki Vikings, a strange and wonderful clash of Viking lore and tropical island iconography featuring a symbol freeze and upgrade system that is as cool as it is hot?

This July, the developer has made the news when it was revealed that their jackpot network, largest in the world, has paid out an amazing €89,879,343 in the first six months of 2019.

Eight lucky victors were turned into millionaires overnight and 380 punters walked home with payouts of more than €10,000.