Microgaming and Just for the Win Announce Tiki Vikings 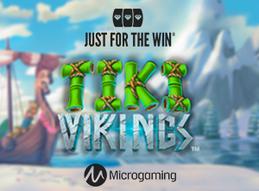 Microgaming is keeping up its intensive game release schedule with a new offering that puts a hot new twist on a tried and true subject.

This combination of hot and cold comes from developer, Just for the Win, who already developed for Microgaming before in such titles as Ruby Casino Queen, Rockabilly Wolves and Shogun of Time.

The new offering from Microgaming has a pretty interesting justification for why tiki torches and masks and pineapples are appearing in the icy Nordic forest.

…the Vikings went on a vacation!

And not a moment too soon, as they plundered the tropics and brought back with them some icy-hot features.

They are the Symbol Lock Re-spin and Symbol Upgrade.

The bearded band of Viking brothers are the high-paying designs in the game and they have a special property.

When they appear, they lock into place and trigger a respin which will continue as long as new high-paying symbols appear.

A gauge will fill to the sides of the playing board, and when it tops up all locked symbols will be transformed into the next highest paying one.

James Buchanan, Director of Global Operations at Microgaming, commented about the release:

“Just For The Win have delivered yet another entertaining and highly original slot game. Tiki Vikings merge two popular themes to great effect, providing players with a colorful and fun base game, boosted with excellent bonus mechanics. The Symbol Lock Re-spin and Symbol Upgrade features add a tremendous sense of energy and momentum to the gameplay, offering the potential for huge rewards.”

On the side of the studio, the CEO Johan Persson stated that the “wacky mashup” is “particularly close to our hearts” and that it was “a blast putting together a cast of grumpy but loveable Viking characters.”

The leading developer is dedicated to keeping on their energetic release schedule.

Just last week, the company released Queen of the Crystal Rays developed by Crazy Tooth Studios – a graphically stunning game featuring multipliers, Any Adjacent Wins, and a special bonus that doubles the size of the playing area.

Also released recently, Break Away Deluxe – reimagining for a hockey-themed classic, the sandy and hot Magic of Sahara, and a totally new Sherlock Holmes adventure Sherlock of London.

The iGaming world is counting down to November for the release of the Jungle Jim follow-up, Jungle Jim and the Lost Sphinx which brings back one of Microgaming’s favorite properties for another spin.

Developing the world’s first true online casino in 1994 and the first mobile casino in 2004, the company has gone on to become one of the biggest names in the iGaming industry today.

Headquartered in the Isle of Man, Microgaming offers an extensive catalog of first-party and third-party games and the biggest jackpot network in the world.

Source: “Microgaming and Just For The Win raid the reels with Tiki Vikings™”. Microgaming. August 7, 2019.