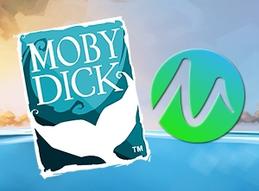 After a July announcement that Michael Myers was coming, Microgaming released their Halloween® online slot on October 4, 2017. The 50 line game is based on the 1978 independent film that saw Jamie Lee Curtis make her movie debut. It's a different kind of creep show compared to most "Halloween" themed slots out there, with Michael stalking his prey from behind a clothesline or in a window. Try not to notice if you are playing at home alone.

Iconic soundbites from the movie are featured as well as the actual characters. The most intriguing mechanic of the game is the Wandering Reels which contain jumbo blocks of matched symbols. Although not entirely original (something similar was first seen on the 40-line Arrows Edge TimeBender slot) the 3x4 block of symbols moving across the screen is unique and can account for big payouts, especially when the block occupies the first three reels.

Monster Wheels is a Microgaming creation available at all partner casinos since Oct 4, and Moby Dick comes from the labs of Rabcat. It will be available via Microgaming Quickfire at all Quickfire-fed partners such as Mr Green and Videoslots on October 18.

Monster Wheels is based on monster trucks. And, even though they are driven by vampires, she-devils, and mummies, the game should maintain appeal year round. The unique thing about Monster Wheels is the choice of reel layout given to players. You can switch between 128 ways and 288 ways after any paid-for spin. When playing 128 ways the five reels have 2-4-2-4-2 visible positions, while 288 ways show 4-3-2-3-4 positions on the reels from left to right.

The Gas Can symbol is a scatter which triggers a bonus round choice. Although the feature can be re-triggered, it's also good to keep in mind that each additional Gas Can that appears during the bonus round awards one free spin. Choose from 12 free spins with 2x multiplier; 6 free with a 4x boost or go for the gusto with three free games and payouts multiplied 8x.

Minimum bet is 0.30 regardless of the number of ways you want to spin.

Rich animations and interesting game mechanics make Rabcat video slots a favorite with all players. Moby Dick has a compulsory 25 pay lines over 5 reels and is only available via Microgaming Quickfire.

Four or more scatters trigger up to 20 free spins and the Win Freezing feature is active during free games. There's also a gambling game with up to 5 chances. You'll either find a tea bag or a fish skeleton at the end of the string in a hot silver or gold cup. A teabag doubles your winnings.