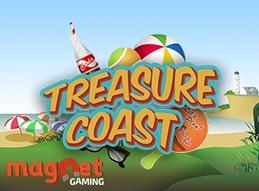 Aalborg, Denmark's Magnet Gaming has released a new slot under the title, Treasure Coast. Players can escape for a little fun in the sun with a chance to win one of two progressive jackpots on the mobile-first slot that plays just as fast and fun on any device. We tested it on an Oculus-ready desktop with a 36" HD display as well as iPhone7 and with Android on a Galaxy on5 - all with the same great results.

The graphics are near "day one" Flash in their retro-simplicity but the game is built and delivered in HTML5 for super fast deployment over almost any internet connection. In addition to bonus trigger symbols, icons on the 3x3 reel set include kites and beachballs along with refreshing drinks, a camera to record the action, and an ice cream cone among others. Matching symbols can line up on any vertical, horizontal, or diagonal line giving players eight ways to win on every spin.

There are five bonus features including a metal detector Lost & Found round, a beach bunker with forgotten gold, 25 free games to hoist as many flags as you can in hopes of bringing down one of the jackpots, a boat race with six possible prizes, and a beach tennis bat game that can award anything from credits to a bonus game, depending on the target your ball hits.

The sound level is constantly displayed in case you get too carried away and want to shush the waves lapping at your feet in the warm sand as you watch the ships and wind sailors go by so you can concentrate on the next line-up to fire off a bonus game.

Next Best Thing to a Holiday

"Everybody loves the thought of being on holiday and Treasure Coast offers players the next best thing. We are sure players will love hunting for those hidden jackpots and bonuses."

The company's unique slots portfolio includes games like Fish Tank, Gold Rush, Haunted House, and Inspector while even more games are set for release later this year. Operators can integrate Magnet games directly by virtue of licenses the company holds with key regulators or access them through distribution platforms like Quickfire, CasinoEngine, GAP, Gameflex, NYX OGS or GAMEIOM.