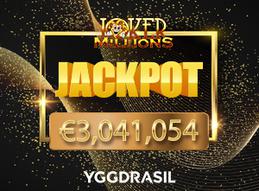 Yggdrasil’s popular slot game, Joker Millions, has made yet another millionaire, making this the third jackpot hit on the developer’s jackpot title in less than 12 months.

The developer’s jackpot titles have seen a hat-trick of prize drops with 7.8 million euros dropping in November 2018 on the title and then a further 3.1 million on Empire Fortune in April of this year.

A lucky Finnish punter is now 3 million euros richer after betting only 50 cents on the game at the Casumo mobile casino.

Commenting for the casino, Anna Pistika, Head of Casino, said:

We’re thrilled to see our players win huge cash prizes. It’s particularly pleasing that it’s a new customer, proving that anyone can win, at any time. This also shows the power of high-quality progressive jackpots such as Yggdrasil’s Joker Millions, and the excitement they create. Huge congratulations to the winner from everyone at Casumo.”

The jackpot game, which was released back in 2015, is one of the developer’s most popular alongside Empire Fortune.

The games feature built-in jackpots and powerful base game features with intuitive gameplay and betting options meaning players can take a spin instantly on any mobile and desktop device.

Giddying Up for a Ride Through Sahara

As the players are hitting life-changing jackpot wins on its games, the developer is not resting on its laurels and is putting out new offerings regularly.

Two such offerings are out this month. First, a new interpretation of the One Thousand and One Nights featuring Scheherazade and the cruel Sultan and storybook symbols along with a genie who also plays the role of the sticky wild in the game’s extra spins mode.

The developer then partnered with the Swedish horse racing operator ATG to produce an exclusive racing theme slot game to be added to the operator’s newly formed casino section.

Yggdrasil is an award-winning developer founded in 2013 by ex-NetEnt CEO, Fredrik Elmqvist, and has since become known for games such as Trolls Bridge and Trolls Bride 2 as well as Wild Robo Factory and many others.

They are also known for their mobile-friendly HTML5-based approach allowing their games to be played on mobile devices and in mobile casinos. The developer also operates a promotional and gamification tool called BOOST which is present in all their titles and allows casino operators to use features such as gamification by enabling features like achievements, missions, and level unlocking.