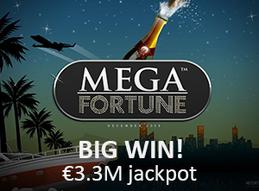 A lucky punter has gone home a multimillionaire after playing a NetEnt game.

This time, it’s a player in Britain rejoicing at their newfound wealth as they received a life-changing amount of money on a very small bet.

Bryan Upton, Director of Games for the casino supplier commented on this lucky event

“We are thrilled that Mega Fortune has again created another instant multi-millionaire and delivered a life-changing win. Since their releases, Mega Fortune and its sibling titles have generated an astonishing 60 one-million-plus euro jackpots.”

“We know that the chance of hitting it real big is something that players really love. Therefore, we’ve made a push to add even more exciting jackpot games to our portfolio. Stay tuned for more innovation in this space,” he concluded.

The company has quite a history with jackpot games such as Mega Fortune, Mega Fortune Dreams, Arabian Nights and Hall of Gods. They have also added new offerings to the jackpot slot line-up such as Grand Spinn Superpot, Mercy of the Gods and Imperial Riches.

"On behalf of everyone at Gate777, I extend huge congratulations to our big winner. We are beyond thrilled when our players have a fantastic experience with us and when they win. We work hard to bring them the best slot and table games the industry has to offer, and we look forward to seeing more and more winners on Gate777."

The company isn’t just making millionaires; they’re also making millions by expanding to new regulated markets. Much has been written in the news about the legalization of online gambling in the state of Pennsylvania.

A state with a long tradition of land-based gambling has opened its doors to online-based operators and like any other suppliers, the company has also decided to enter by going live with its portfolio in this newly regulated US state.

Another newsworthy event for the company…

…was the acquisition of Red Tiger Gaming earlier this month which has seen the casino supplier pay 220 million pounds to obtain the studio in a reportedly all-cash deal.

This acquisition will allow the company to focus on its major strategic goals such as expanding into regulated markets and scalable growth.

NetEnt is one of the giants in the global igaming space, having been established in 1996, and has always been a pioneer in innovation and driving the market with thrilling games powered by a cutting-edge platform.

The company is listed on NASDAQ Stockholm and employs 900 people in Malta, Stockholm, Kyiv, Krakow, Gothenburg, Gibraltar and New Jersey.