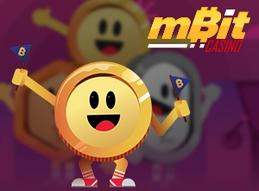 mBit Casino recently announced that they have expanded the range of cryptocurrencies they will transact in to include Litecoin, Bitcoin Cash, and Dogecoin. They are one of the first online purveyors of gambling games to accept Dogecoin. With the standard bitcoin deposits and withdrawals, this brings the crypto methods accepted there to 4, including 3 of the 5 largest based on market cap.

What The Heck Is Dogecoin?

Don't feel bad if you've never heard of Dogecoin. It features a dog as its logo and was reportedly introduced as a joke currency in late 2013. The next month it reached a market capitalization of US$60 million and today is sitting at $1,036,222,432. "Market Cap" simply refers to the total USD value of Dogecoin supply in circulation. They are worth about a penny each.

Forward-thinking online casinos have had to offer alternatives to bitcoin for their customers who prefer cryptocurrencies due largely to scaling issues involved with the biggest coin. Transaction fees and times are simply too large and too long as the bitcoin blockchain was not designed for the volume and pressure it is now under due to its popularity. The so-called alt-coins are cheaper to transact in and transfers can be much quicker.

Whichever manner of currency you wish to transact in, mBit still offers a 110% match bonus for new players. The casino is also offering tournaments throughout the month of January. The loyalty shop gift store is still open and VIPs enjoy automatic enrollment into the casino's lottery draws. The site launched in 2014 and offers hundreds of games from top providers like Betsoft, SoftSwiss, Endorphina, and more. If you are new to blockchain gambling, you'll find handy guides on the site to help you kick off a new way to play.

Although not open to Americans, the site is available in English and several Asian languages.