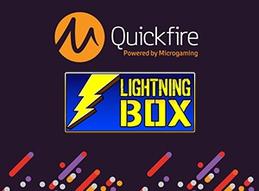 Lightning Box, a specialty game developer based in Sydney that supplies online, land-based and mobile/social casinos, has signed an agreement with Microgaming to distribute their popular games over the Quickfire network.

Lightning Box was founded in 2004 by former game mathematicians from Aristocrat and IGT, Peter Causley and David Little who set out on their own with 40 years combined experience in 2009. In 2010 they launched their first online games on what was then known as Chartwell software. Chartwell was later sold to Amaya and then picked up by NYX, which was recently acquired by Scientific Games Corp. Microgaming Systems launched the first true online casino in 1994 and unveiled the multi-developer Quickfire Games in 2010.

Lightning Box co-founder and CEO, Peter Causley said of the three-year deal: "We’re very pleased to have signed a deal for Quickfire because it’s great to have another route to get even more of our unique Aussie content into the market.

“The Quickfire platform is a very strong distribution channel, with over 200 operators integrated, and will open up a host of new opportunities for us with new customers in markets around the world.”

Silver Lioness 4x will be the first game deployed on the platform. The title is slated for a February 2018 release and will be available to all Quickfire partner casinos such as Mr Green. More titles are expected to begin flowing from Lightning Box soon after the inaugural release.

Microgaming Quickfire offers over 600 games including content from 25 development partners.

Quickfire Director, Andrew Clucas said: "Lightning Box is a fantastic addition to our development partner portfolio; their games are enjoyed by land-based, social and online players around the world. It is great to have them on board.”

The Lightning Box portfolio currently boasts more than 50 titles including their latest release, Stellar Jackpots-Serengeti Lions. The 5x4 video slot plays more like a land-based casino game than do most online games, with animations and win celebrations that seem native to the atmosphere of play.