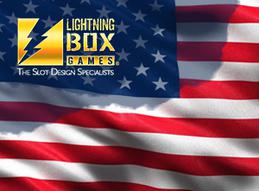 Game developer, Lightning Box, has announced it will expand the offering of its games in the US market by bringing over two of its most popular slots to the regulated state of New Jersey.

In the first US release since April, the developer is adding these games on the back of increased interest in their portfolio since they entered the American market at the beginning of 2019.

The two games in question are RedRoo and Stellar Jackpots with Serengeti Lions and they come after the company has already successfully introduced Astro Pug and Astro Cat.

For gamers outside of the US markets, RedRoo from Lightning Box has been available for more than two years, and now Garden State punters will also get to see what made this game so popular in the first place.

RedRoo is a celebration of all things Australian, featuring the nation’s most famous animal. And in that vein, all of the aspects of the slot are outback-themed.

From the desert in the background to the sandy beach, punters are transported during the special feature.

Players in NJ will also get to enjoy the special features on offer including an extra spins mode offering the possibility of a massive x27 multiplier!

When it comes to Stellar Jackpots with Serengeti Lions, it’s all about the jackpots, with the game offering three different tiers.

In addition to the American release of two of their popular games, the developer has had a full schedule recently.

Early last month, it announced a collaboration with Incredible Technologies to revamp Astro Cat and bring it to the online world.

Just a few days ago, Pinata Bucks was released featuring Reelfecta and an unusual reel layout.

The colorful game takes the pinata concept into slot games and lets players smash them during bonus games to reveal prizes.

“We’re thrilled to be releasing two more of our games into the U.S. market as we can continue to expand our offering in the territory.

“Some of our most popular games have already gone down a storm in New Jersey online casinos and we’re confident both RedRoo and Stellar Jackpots with Serengeti Lions will receive a similar response once they are released.”

The software brand serves as a multi-channel supplier of video slots to the gaming industry. The independent studio based in Sydney, Australia provides content for land-based, online, and social casinos around the world.