Lighting Box Hopes Pinata Bucks will be a Smash Hit 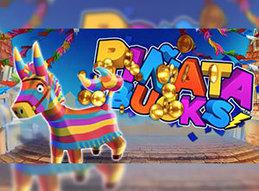 Get ready for a fun and vibrant time because developer, Lightning Box, has announced a new slot game where colorful pinatas pay out money instead of candy.

Players can expect a bright and flashy experience themed after the popular fixture of Mexican parties – the pinata.

In Pinata Bucks, Lightning Box made pinatas represent massive bonuses that if the player is lucky will burst open to uncover some very juicy jackpots.

Players who are familiar with this developer’s previous work will immediately recognize the Reelfecta feature.

The feature has made appearances in previous games by this developer, most notably Astro Cat and Astro Pug, where it made an impression as a fun addition to already unique games.

The slot is arranged in an unusual 2-2-4-4-4-4-2-2 grid where the central area is the 4x4 Reelfecta. What this entails is that on that central area, symbols don’t have to be in sequence to form a win.

But the player still must have the same two symbols in the first two reels in any position.

…there’s potential for all kinds of surprises.

But There’s Even More:

If five or more pinatas show up, the players are ushered into a special mode called Pinata Lock Spins. Pinata symbols will land on the reels and when they do, they remain in place.

As more of them collect, they will merge into larger symbols of up to 3x3.

After five spins, the pinatas are finally smashed to reveal the prizes within. They depend upon the size, but the largest 3x3 one can contain up to 50x the total bet or one of the four possible jackpots.

Peter Causley, the CEO, and co-founder of Lightning Box said:

“We’re delighted to release Pinata Bucks, the newest Reelfecta title in the Lightning Box portfolio. With a fun theme, engaging graphics, and huge win potential, Pinata Bucks could be an explosive adventure for players.”

Lighting Box has recently had a high profile game released in Astro Cat Deluxe where they combined forces with Incredible Technologies to revamp on of the most popular games in land-based casinos which has also seen much success online.

The revamped version has all of the features players loved in the original release and a new Sky Wheel feature. The Sky Wheel is a prize wheel used to dole out bonuses and jackpots.

Lighting Box has been active since 2004 and is comprised of a team of producers, mathematicians, illustrators, and animators with years of industry experience.

The founders of the company have worked on the math models behind some of the most famous slots from IGT and Aristocrat.