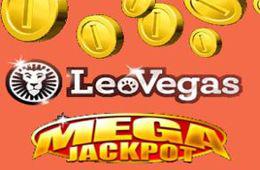 A lucky player who goes by the name of Joakim was playing for €1.05 on the Mega Fortune Dreams mobile slot this week, and he unexpectedly picked up a sizable payout in the process. A win worth €238,667 was won on one of the progressives, and that's a pretty nice win. This prize was picked up in the mobile version of LeoVegas Casino, and that just goes to show that mobile players can win a ton of money as well.

Mega Fortune is known for being the largest progressive slot available from Net Entertainment. They updated the graphics and appearance with Mega Fortune Dreams, but it still gives players the same progressive jackpot experience with three different progressives that can be won on any particular spin. It's available for players at all stakes, and the chances of winning the jackpots are scaled according to the size of your bet. This means that small stakes players have a fair chance to win compared to people who have larger bankrolls. This dynamic is something that has helped to make Mega Fortune such a popular title among players at all levels.

This jackpot win also illustrates something else that we've been seeing more and more of over the past couple of years: The mobile revolution is officially here. Mobile has been the fastest-growing segment of the online casino industry for a few years in a row, and more people than ever are playing via smartphones, tablets and other mobile devices. Joakim's big progressive win is a good example of mobile players picking up bigger and bigger prizes.

LeoVegas Casino is a highly-rated online casino that's been running in 2012. While they don't have the long history of some other casino sites, what they do offer is a consistent reputation for being trustworthy with payments and taking care of their players via solid customer service. They offer games from a number of software developers including Net Entertainment, Microgaming, Play'n Go, IGT, Evolution Gaming and others. As you can see from Joakim's big win, they also have a ton of progressive jackpots, many of which have made multiple people into millionaires over the years.