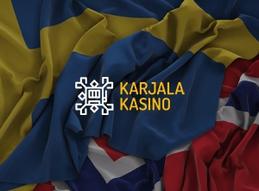 When Karjala Kasino opened in June this year they only accepted players from Finland. That has changed slightly as the iGaming Cloud-powered niche site announced on Friday that they will be accepting players from Norway and Sweden as well. They've also added Karelian speaking support to their staff, making Karjala Kasino the first online casino in the world to support players from the Karelian region, which is shared by Russia.

At the beginning of November, the website was rebranded with entirely new content and a new look as well. In what must be an inclusionary and welcoming gesture to players in the Karelian region in the East of Finland, the backdrop is reminiscent of the red on white embroidery there that is so much a part of their culture. The snowflake logo is nice for winter too.

Adnan Maslo, CEO of Karjala Kasino said: "Based on previous demand, we also opened the brand to international traffic by adding Swedish and Norwegian languages to the site and to the support team."

He continued, "We launched Karjala Kasino originally in summer 2017 for Finnish players and the demand from other markets was very strong already from the start. Overall, the launch has exceeded our expectation and the brand is finding a nice place in the heart of the Finns".

Karjala Kasino brand manager Henri Kukkonen said of the Karelian dialect: "Every Finn is guaranteed to recognize it. We wanted to give our Finnish players something [fun] and unique without risking losing our identity as a truly Finnish and Karelian brand."

"There are many hyperlocal Finnish brands, but many of them fail to produce a Finnish experience that goes deeper than the brand name and graphics. Our players and affiliates should be happy to see that we’ve pulled the rabbit out of the hat with this one at Karjala Kasino," he said in conclusion.

Karjala Kasino is powered by Gaming Innovation Group's (GiG) iGaming Cloud gaming platform which is used by their own casinos (Rizk, Guts, etc) as well as white labels and third-party operators.

GiG is based in Malta with offices in Marbella, Gibraltar, Oslo, Kristiansand, and Copenhagen.