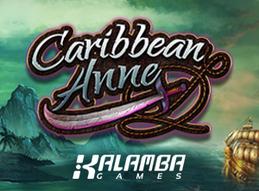 Game developer Kalamba is taking punters on a swashbuckling adventure through the high seas in this new offering they’re calling Caribbean Anne.

Perhaps in a not-so-subtle wink at Pirates of the Caribbean, one of the most successful film series in recent memory, the developer has chosen the pirate theme.

Anne will traipse over the decks and the sails to search out for treasures and defeat fearsome monsters as the sea rages in this 5x4 offering with 40 paylines.

Kalamba Games is hoping to re-invent the familiar theme…

…with new gameplay ideas such as Locking Multiplier Wilds and Wild Spin and making it exciting with four different progressive jackpots.

Of course, the developer isn’t forgoing the features that made its slots famous and popular in the first place.

The title comes equipped with Hyper Bet and Hyper Bonus. Like in most games from this studio, punters can choose their level of multiplier wilds by selecting one of five levels from the menu on the left.

And it’s also possible to buy your way into the extra spins feature with just one click.

The new feature on offer here…

…is the Locking Multiplier Wilds. Called “accumulation wilds,” symbols will appear that leave their frames on the reel they showed up in. Every 10th spin these frames are transformed into wilds.

Of course, that’s also where jackpots come into play, determined by the number of special jackpot symbols that appear in one spin.

This mode can be lengthened by collecting bombs. Each gives out one additional spin.

“We constantly strive to deliver innovative mechanics that boost revenue for operators. With our most successful and popular features, Caribbean Anne is set to become a top performer of our portfolio.”

The game will be exclusively distributed by Relax Gaming, the innovative content aggregator boasting over 570 games which services the iGaming industry across multiple regulated markets.

The company focuses on creating games that bring the best of social gaming to RMG and gameplay elements that drive revenue to make operators successful.

Their portfolio currently has 16 games.