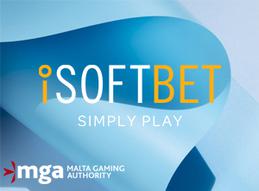 Game developer and casino content supplier, iSoftBet, has obtained the Malta B2B Supplier License from the Malta Gaming Authority (MGA), which is the relevant gaming governing body for the market.

This license will enable the company to do business without hindrance to all other gaming companies that are licensed by the same body.

The developer is already present in 16 of the world’s largest and emerging regulated territories but this license is an important regulatory landmark because Malta is one of the most important markets for igaming companies proven by the fact all the major players are licensed in the territory.

“We are one of the most certified and compliant suppliers in the iGaming industry. Malta is a key milestone for iSoftBet, and we’re delighted to have gone through the licensing process with flying colors.

“This enables us to both extend our relationships with existing tier one customers as well as gain access to a wealth of potential new clients. Malta is attracting an increasing number of well-known operators and we’re excited about what the future holds there.”

This new license means that more than 100 of the company’s titles, including classic titles like Hot spin, Vegas High Roller, and Wild Ape are now available to all the casino operators who are also licensed in what is arguably the most important gambling market and territory.

From Switzerland to Malta

The news of the Malta license is not the only regulatory news for this company this year.

Pursuing a strategy of expansion and global growth, the company also obtained a license for the newly regulated Swiss market.

The country has reformed its market like many other European countries recently. According to the laws that took effect in July this year foreign operators are blocked from operating in the country, but companies can apply for a Swiss license and offer gambling services.

This has led to many of the best-known igaming firms racing to obtain a license in a market that is deemed very attractive.

The supplier company has also been very active this month when it comes to partnerships and content deals and signed agreements with one of the industry’s leading socially responsible operators PAF and with one of the largest European operators, LeoVegas.

Recently, the company has also released a new game called Dragon Stone to wider market after a period of exclusivity at operators Rizk and Go Wild.

iSoftBet is a premium online and mobile casino supplier which provides content to some of the world’s leading operators. The company offers a tailor-made approach to fulfill the needs of their clients.

Their portfolio contains more than 100 proprietary slots, table games, as well as licensed products from some of the most famous TV and movie production companies including 24 and Paranormal Activity.