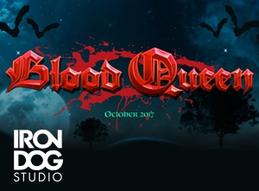 Iron Dog Studio is ready to fulfill any morbid desire players may have for Halloween games. This year, the design works at 1x2 Network are whetting appetites with news of an October release of Blood Queen. One glance at the stylized logo or any characters populating the reels is enough to guess that the game is set in Transylvania and will provide thrills far beyond the spooky season.

There is a love/hate relationship here between Ivanka, the Vampire Blood Queen, and a character called, Van Hell. During the free spin feature, players will be awarded 20, 30, or 50 free spins and will have to choose between Hell and the Blood Queen to provide powerful wild symbols during the feature round.

Van Hell gives sticky wilds which can theoretically fill the entire screen, while the Queen fills the reels when her vial of blood appears if the Blood Queen option is chosen. Her wild reels move across the screen to the left from their original positions until they have nowhere else to go before disappearing.

The Gargoyle, which is an expanding wild during the base game is nowhere to be found during the feature.

The Nitty-Gritty on Blood Queen

Although there are no wild multipliers of 1x, 2x, 3x, etc., the fact there are multiple wilds on successive spins for all 30 pay lines more than makes up for that. The game also spares players any inconsequential picking bonus games and stays tight on the action with wild possibilities on every spin.

The betting range is configurable up to 90 euro per spin and the max payout for a single screen is 360,000 euro. The theoretical return to player percentage (RTP) is 96.07 percent. Without knowing hit frequency or the theoretical distribution of wins, such a huge potential jackpot (4,000x total bet) makes it safe to say that this is a highly volatile game. The few whose fates are sealed by properly choosing the Queen or her lover and potential slayer will be bathed in big wins - while we poor mortals will most likely be highly entertained by the stunning graphics and horror movie soundscape while paying for the privilege to play most spins.

Who will you choose when the fatal hour arrives? We suggest that you try the highly rated Red Queen Casino for this and other Iron Dog Studio games.

Iron Dog Studio is a new brand within the 1x2 Network that was announced in June 2017 when it was also announced that 1x2 Gaming had rebranded their corporate identity. Games will be released on NYX OGS through 2017 and beyond.

1×2 Commercial Director Kevin Reid had this to say about the company: "1x2 has grown so far from the small niche we targeted back in 2002. We now offer such a broad range of content and services, that we felt it was time to identify our growing expertise and what we offer, all of which utilize the infrastructure behind 15 years of game development and integrations," said Reid in June.