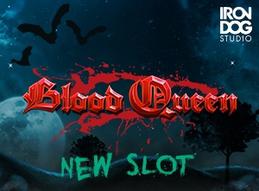 Iron Dog Studio announced today that they have let loose the Blood Queen at partner casinos, giving players plenty of time before Halloween to choose between her lover/slayer and the vampiress herself.

First mentioned for an October release in late September, the game pits Ivanka the Blood Queen against her sometime lover, Van Hell. Hell's job is to drive a stake through her homovorus heart, but somehow she has him in thrall and he just can't seem to bring himself to the task. The love/hate relationship builds tension in the 5 reel, 30 pay line slot's narrative accented by stacks of wild gargoyles in the base game.

Choose Your Side in the Seduction Battle

The Queen's Ruby, the Stake, and the Vampire all pay big with stunning animations and a soundtrack right out of a classic horror film. Players can win 20, 30, or 50 free spins in the Seduction Battle after landing three or more scatters in the shape of a lover's heart and depicting the star-crossed duo who are poised for a kiss. Choose between one of two bonus game modes. Picking Van Hell awards free games with sticky spreading wilds while selecting the Blood Queen awards games with shifting expanding wild symbols.

The game screen is foggy and steeped in blue-gray hues with skeletons and vampire bats flanking the reels. Oil torches flicker atop ornately accented stone pillars, making the colorful reel icons nearly jump off the screen to bite you. Players can bet up to 90.00 per spins or as little as 0.30. The jackpot, based on a max bet is 360,000. Wild gargoyles can fill the entire screen in the base game and the Van Hell or Blood Queen character wild symbols can flood the reels and bankrolls during the feature.