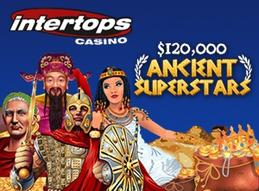 Intertops is never shy about letting their players compete against each other on a leaderboard. This month they are rolling out $30,000 each week in bonus prizes as part of a monthlong $120,000 Ancient Superstars bonus contest.

Each week the top 300 players will compete for bonuses up to $500 each. The top 20 frequent players each week will be entered into a prize draw for $1,000 cash with no wagering requirements.

Climb The Leaderboard on Desktop or Mobile

Visit Intertops using your desktop or mobile and rack up points playing your favorite games. The higher your points, the higher you'll rank on the scoreboards. But don't plan to rest on your laurels with Caesar or get too comfy in your Cleopatra recliner. Once you knock someone out of their position you can expect the competition to heat back up. Casual players can still win a bonus but the top prizes usually go to the most fierce competitors.

"You don’t have to be a frequent player to be legendary this month!" said Intertops Casino’s manager.  "Every Thursday there’s another 50 bonus prizes that are awarded randomly – so anyone that’s played even a little that week can win!"

New RTG Game For The Holidays

Intertops used the bonus competition announcement to remind readers about a new holiday slot that is slated for release later this month. Swindle All the Way will take its place among Christmas classics like Naughty or Nice and Rudolph's Revenge.

The new slot from Realtime Gaming features thieves who plan to steal all the presents beneath the tree and you are going to have to catch them to stop the swindle. Trigger the bonus feature to pick windows where they might be hiding and reap the rewards with up to 60 free spins and multipliers as high as 33x!

The Ancient Superstars competition for bonuses and straight-up cash is available until the fourth of December. Log in or create your first new account to play here.

Intertops is the grand old man of online casinos. The company took the first sports bet ever made over the internet in 1996 and launched their first casino games in 1998.