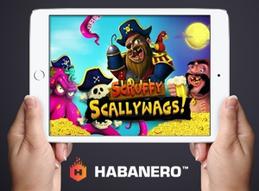 Multi language, multi currency HTML5 slots and table game developer, Habanero Systems has released a new pirate themed game called Scruffy Scallywags. The game looks as fun as it sounds with a motley crew of characters and all the trappings of the life of a brigand plying his trade on the seven seas.

Between the Rudder and the Bowsprit

The five-reel twenty-five pay line video slot sets players out on an adventure with a group of nautical seafarers on the hunt for the legendary Kraken with plentiful mugs of grog and bounties of demon rum scatters to trigger a free games feature. Once your mateys spot the leviathan pinkish-purple monster octopus, the sea monster will add extra wild symbols to the reels. Compasses, which no self-respecting pirate of old would be caught dead with, add a modern touch to the game and award multipliers, cash bootie, and re-spins.

"..one of our most exciting titles to date"

Habanero's  Head of Corporate Communications, Toni Karapetrov said: “With stunning graphics, crystal clear sounds and a gripping storyline to boot, Scruffy Scallywags is one of our most exciting titles to date.

“The thought of incredible riches and the mysterious Kraken is sure to excite players and we’re sure they’ll take to life on the ocean waves.”

A Raft of New Games

Scruffy Scallywags is the latest in a recent deluge of new releases from the developer with offices in Europe, Asia, and Africa. The last four games released; The Dead Escape, Panda Panda, Bird of Thunder, and Fire Rooster have met with mostly enthusiastic responses on player forums and from industry observers. Habanero games can be found at several US-facing casinos.

Square in the Air Communications Ltd, Sail away with Habanero’s Scruffy Scallywags, 08-29-2017