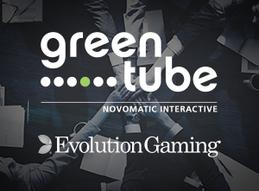 Greentube, part of the Novomatic Interactive division, has joined with Evolution Gaming to power its live casino offerings across several jurisdictions.

The agreement represents a continuation of the developer’s policy to deliver “safe and secure casino entertainment to players around the world.”

Under the terms, Evolution will deploy its content for Greentube customers across several regulated markets, including the UK via Admiral Casino, and Italy and Spain with Starvegas.

“We are delighted to sign with Evolution Gaming. Last year we launched the new UK casino brand Admiral Casino and launching a live casino is an important next step for the brand and our growth plans.

“Live casino is now a prerequisite for a digital casino and Evolution Gaming come with a fantastic pedigree and a market-leading product. I look forward to growing our relationship with Evolution.”

Commenting on the partnership, Sebastian Johannisson, Chief Commercial Officer at Evolution, stated that they are “delighted to announce this deal” and “confident that our wide range of outstanding live casino games and live game shows will be the perfect addition to Greentube’s content portfolio.”

It’s been quite a busy quarter for the live casino supplier as they have unveiled new games and also inked fresh deals that will let them corner bigger pieces of the European iGaming market.

Early last month, the company unveiled their new take on live poker rooms called “Side Bet City”, a game meant for novice players and those looking for a light but fun challenge.

The game is set in the glamour of 1980s Las Vegas and features bright neon lights and a retro atmosphere.

Unlike in standard poker, players bet on a paytable to see what kind of a hand they’ll get.

…the casino supplier entered into deals that let it spread its reach in the Estonian and Italian markets. Estonian punters will get access to Evolution’s games through Optibet via Enlabs and in Italy, it’s Planetwin365 that’s joined the list of the developer’s partners.

Their main feature is the “Go Live” button which transports players from the simplified First Person version into the live offering with real dealers creating a perfect bridge to bring in neophyte gamblers into the fray.

Evolution leads the way in B2B live casino services delivered via multiple channels and devices. With their innovative software and enterprise-class infrastructure, they add value to their partners’ business.