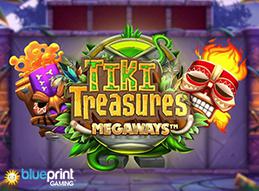 Blueprint Gaming has unveiled their newest slot game, Tiki Treasures Megaways, which will be the first game to combine the developer’s Jackpot King progressive pot system with the popular Megaways mechanic.

Players will go on a deep jungle expedition where the Megaways engine will keep things unpredictable and exciting by changing the number of possible paylines. From a respectable 324 to a ludicrous 117,649.

A Wealth of Prizes on the Reels:

Blueprint has released games with the Megaways feature before such as the recently released Lightning Strike Megaways, but this is the first time it’s being combined with a cross-game progressive jackpot which will allow punters to grab prizes from all of the linked games.

There will also be two “must be won” jackpots, the Regal and the Royal, which will be guaranteed to pay out a fixed value.

Jo Purvis, Director of Marketing and Relationships at Blueprint, remarked on the combination of Megaways with Jackpot King: “Our MegawaysTM  titles have been well received by players and combining the Jackpot King progressive system for the first time means there’s a wealth of prizes to be found on the reels!

Expounding further on what the merger of Megaways and Jackpot King means for this game, he added:

“Whether it’s through the game’s free spins rounds or the must-win pots, engagement levels are set for an all-time high as players seek the lost treasures of the Tiki.”

What will definitely most exciting to players when this slot releases soon are the dynamic and unpredictable nature of the game.  Being a cascading offering, winning symbols will be removed from the playing field and replaced with new ones. As always, the cascade goes on until there are no more winning combinations.

Coupled with the Megaways feature found in many Blueprint releases it means the number of possible paylines on each spin is never the same.

There are also extra spins that can be retriggered, so this promises to be an appealing game.

The supplier is a UK-based game studio and part of Germany’s Gauselmann Group. Creating exciting slot games for the global online and mobile markets with their games available on over 100,000 land-based terminals across the UK, Germany, and Italy.

Their commitment to creating online slots with an exciting mechanic and unpredictable spins helps them stand out from the competition.

A marriage between Megaways and Jackpot King isn’t the only thing cooking the Blueprint Kitchen. The developer has recently announced a licensed game based on the beloved 80s cartoon Thundercats.

Players will get to step into the shoes of popular characters like Lion-O, Tygra and others to battle the forces of evil.

The developer hopes to bring the animated show to life and appeal to a wide audience.