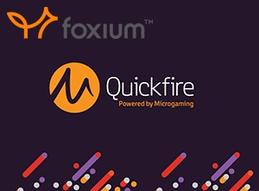 It was announced less than a month ago that game developer Foxium had accepted a deal with Velo Partners, giving them access to RNG Foundry assets including distribution, technical resources, and equity investment to move the company's unique product line forward. Today Microgaming Quickfire has announced that Foxium has chosen the company's platform in an exclusive deal brokered by RNG Foundry.

Foxium has offices in Estonia and Sweden and has produced several video slots for the online market including Fruitz, Lucky Bakery, The Odd Forest, and The Lost Riches of Amazon. All of the company's creations are rich in narrative and include unique game mechanics that dovetail brilliantly with the slot themes and storylines.

Terms of the deal will see Foxium games released exclusively on Quickfire making them available to more than 250 different online casinos. The company's first launch on the platform is slated to be Vampire: The Masquerade – Las Vegas. The 5 reel, 3 position slot has 30 pay lines and is set in a dark game world showing Las Vegas icons under a stormy sky in foreboding shades of gray with muted gold tones.

Where to Find the New Game

The game offers three separate free spins rounds in addition to a picking bonus. Vampires is expected to go live in casinos such as Mr Green and Slots million on November 1, 2017.

Foxium CEO, Åke André spoke of the exclusive deal as a way to reach more operators and capitalize on the growing market. He also said the company plans to take advantage of added value features integral to Quickfire such as gamification tools and the platform's Achievements module.