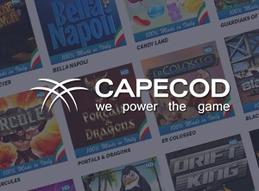 Capecod Gaming, an Italian HTML5 and Flash online casino game developer, announced the release of four new titles on Friday. The games all capture their unique digital style and are 100% made in Italy.

As impressive as the graphics and narratives are on the quartet, some of the technical details are even more intriguing to some players. Guardians of the Kingdom focuses on mystical animal guardians ready to protect humanity with their powers. Players join them in an epic power struggle against outside forces as they spin the reels of the video slot that plays in Flash 11.0+ and is HTML5 supported. Players can win up to 500x line bet when they enter the Kingdom with expanding wilds and magic re-spins.

A Fun Game Focused on Naples

Bella Napoli pays tribute to the beautiful Italian city of Naples. The game presents comedic 3D characters and takes players on a fun and culturally enriching journey through the ancient city of the sun with 500 domes. Players can bet up to 0.50 per line on this colorful 25 line game with wild symbols, random wilds, and a uniquely Italian Bonus Tombola game. Triggering the bonus sets up tombola sheets to be filled with the numbers generated. The first sheet to be filled will display the number of free spins won. During the bonus game, wild symbols can appear anywhere on the reels to increase players' chances of winning. Five wild symbols pay 2000 coins.

Candy Land takes players to a land where the buildings are made of marzipan and there are only 10 pay lines to worry about. There are three visible positions on each of the five reels offering expanded wild symbols which trigger re-spins. Players will make more than half of their money from regular spins, but the re-spin will account for more than a third as well. About one out of five spins will be a winner on this sweet 96.8% RTP slot.

The fourth game announced is Ercole. Venture back to ancient Rome and witness the labors of Hercules. The mythological theme is powerful and so are the features. Lining up two adjacent Hydra symbol halves will trigger a mystery bonus game awarding a random win. There is also a three-tier bonus game triggered by Ercole scatters where cash and/or free spins can be won. The game also offers one wild and one wild multiplier symbol. The overall RTP is a bit lower than others at 94.52% but a single line win in the base game can pay 4,000x line bet and free spins won in the bonus game can award up to 15,000x line bet.

Capecod Gaming's latest release brings their slot portfolio up to 43 games including Klondike Fever and Penguin Safari. Capecod Gaming began as a software house in 1987 and entered the online gaming market in 2007 with the first 100% Italian poker platform. Soon after, they released their own iGaming Platform and began porting popular land-based slot games to online and mobile players. By 2013 they had developed their own-brand slot games. Longtime partners include Merkur Win and Mr Green Casinos.