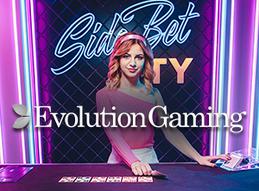 Evolution Gaming, the leading provider of live casino solutions, has announced the launch of Side Bet City, a 1980s-themed poker room that promises to give punters a real taste of the 80s.

Transporting players back to 1985 it’s a Las Vegas poker room with a stunning setting complete with bright neon lights for an authentic late-night buzz.

Side Bet City aims to be a fun and fast-paced game designed to be played not against a standard dealer but against a paytable for an unlimited number of online players.

Instead of playing out like real poker, players will only bet on what kind of hand they’ll get, a 3 card hard, a 5 card hand, or a 7 card hand. They can also select the “All Lose” option or any combination.

Winning hands in this poker room are based on the standard poker rules and no input is needed from the players after the initial bet. Evolution Gaming promises that this is poker made easy.

But time will tell if punters around the world will warm up to a simplified game like this.

Commenting on the potential of this new poker room, Evolution’s Chief Product Officer, Todd Haushalter, said: “We are very excited by the potential of Side Bet City because it adds something very different and distinctive to our already wide choice of poker variants. Side Bet City is a fast, simple live poker game with big payouts, all wrapped in a 1980s’ theme.”

Haushalter continued: “We feel the game will attract the widest range of players with the way the game plays out. Players new to poker will love it because it’s an easy and entertaining introduction to the game. More experienced poker players, meanwhile, will also find the game huge fun because it presents a different kind of poker challenge and also because there are big payouts on offer of up to 1000 to 1.”

This release comes only a short time after Lightning Dice was debuted earlier in June.

This new and innovative poker room, which takes liberal inspiration from the 80s, comes hot off the heels of Evolution Gaming being crowned Casino Supplier of the Year for the 10th year running at the EGR B2B Awards.

They beat out eight other shortlisted nominees and won the award at the ceremony held at the Tower of London.

After the awards ceremony Martin Carlesund, Evolution Group CEO said: “2019 has been an absolute record year for Evolution so far — a year in which we have pushed the boundaries of Live Casino even further, carving out a whole new segment for Live Casino with our growing range of live game shows. We have launched some landmark new games in partnership with powerhouse brands. Titles such as Deal or No Deal Live, for example, are taking Live Casino gaming into exciting new territory.”