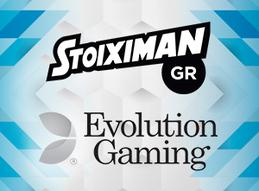 OPAP-controlled casino operator, Stoiximan Group, has just added live casino content from powerhouse developer, Evolution Gaming, after a deal has been struck between the two companies.

The agreement covers the entire range from the prolific live casino and table game developer including some of their most beloved products and a collection of gameshow based properties such as Deal or No Deal Live.

The operator is expected to release these offerings across all of its international brands, including the Stoiximan and Betano online venues. Players in these countries will get to enjoy various casino table games that the developer offers.

“This deal supports our group’s aim of international growth and its vision to become one of the top operators in Europe,”

“Evolution Gaming is a natural addition to our game portfolio, not simply because of the quality of the Evolution games but also because of their extensive experience of delivering live casino services across a wide range of European markets.”

Commenting for Evolution, Sebastian Johannisson, CCO at the company noted they are very excited to begin working with Stoiximan as the operator is in the leading position in the Greek iGaming market. He also stressed that Greece has strong growth potential when it comes to online gambling.

“Additionally, this deal is focused on the exciting opportunities to enrich the group’s Betano-branded live gaming offerings in other key European markets, both today and in the future as the Betano brand extends its reach,” he concluded.

Busy Quarter for the Developer

The live casino game company has had a pretty fruitful quarter this year as they have signed deals with various operators and content aggregators as well as published a host of new titles that are pushing the envelope in the traditional table gaming space.

The most recent partnership was struck last month when Greentube, a part of the heavy hitter Novomatic and it will see the developer’s titles become a part of their content network including deployment into some very lucrative markets such as the UK and Spain.

The company was also busy putting some innovative products to freshen up its line-up. They’re putting it all on red with the release of First Person Lightning Roulette and Dream Catcher.

The games in question…

…are RNG versions of the acclaimed and award-winning live games from the developer’s catalog.

A key feature is the “Go Live” button which can immediately transfer punters to the live version of the game with traditional rules and live dealers.

Stoiximan Group is controlled by the Greek gaming giant and former government monopoly OPAP which acquired a 36.75% stake in September last year before acquiring a further 51% in January 2019.

Evolution is a supplier of live game content for casinos. They are known for innovating and delivering new twists on old games. It has offices in Tallinn, Riga, Vilnius, Malta, and Stockholm.