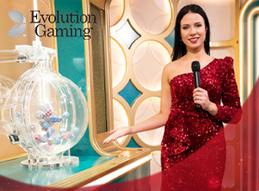 All bingo lovers will excite the news that Evolution Gaming has something right up their alley – a new release titled Mega Ball. As its name reveals, this title is a ball game: a quite exciting one that is bringing a unique game show format and great winning possibilities.

The key to scoring the best wins is to have luck on your side and get as many lines per card as possible. 51 balls are spinning in the ball drawing machine. When the last ball has been drawn players can collect their winnings.

Using its well-known bingo-style game mechanics and combining it with a unique format, Evolution Gaming has built this release on its extremely successful multiplier concept. This component doesn’t only increase the winning potential, but also make gameplay much more interesting.

How Much Players Can Win?

The answer to the question that interest the most depends on how many lines one punter has won. Each card contains 5x5 squares while the center square is free. It is possible to set the value of each card, from €0.10 up to €100.

Players can get information on the winning possibilities if a specific ball is drawn in the user interface, which makes this bingo game more exciting. What adds even more suspension are the one or two bonus rounds that can be initiated. Also, a multiplier is generated and one Mega Ball is drawn in each bonus round.

The paytable shows the amount of winnings. If the lines contain a multiplier, such winnings will be multiplied accordingly.

At lines that have two multipliers...

...only the highest multiplier will be used.

A Portfolio that Keeps Evolving

Evolution recently stole the show at ICE 2020, held in February in London. The provider wowed the audience with a presentation of its 12 new and unique games.

In addition to Lightning Baccarat and Speed Blackjack which are already available to play at partner online casinos, the company’s fun game show-style Crazy Time made the greatest impact.

Instant Roulette, the fastest Roulette game with multiple synchronized wheels and Power Blackjack which enables players to triple or quadruple their bet on the initial two cards were also part of the brand's presentation. As well as Live Craps, five new First Person games, and last but not least - Mega Ball.

At the time, the company’s Chief Product Officer, Todd Haushalter, explained that all of Evolution’s new games are built on three pillars:

The provider’s latest bingo release certainly fits these criteria, according to Haushalter who added that “Mega Ball is another key breakthrough game: a lottery/bingo-style game that we hope will again open up Live Casino to yet another new group of players.”