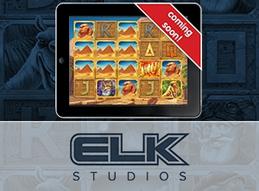 Elk Studios out of Stockholm, Sweden will be releasing a new game on September 13, 2017. The 13th game in their portfolio, Hidden promises to capture players with state of the art graphics, a mesmerizing soundtrack and features galore.

Founded in 2012, ELK Studios released their first game the next year and their fan base has grown exponentially, especially since their games got picked up at leading international casinos like Mr Green and Leo Vegas - no mean feat for a boutique company that only release about 3 slots per year on average.

Despite its name, Hidden was developed in plain sight with the company releasing demo versions of the game on their website as all of the elements came together - from draft drawings to the first playable version of the base game, all the way through to putting the polishing touches on the bonus game.

Not Just Another Egyptian Slot

Hidden is set in more modern times than most Egyptian-themed slots, with an adventure and discovery narrative. The game math points to a very high variance game with a 24% hit frequency. Those facts alone explain why the "jackpot spin" on Hidden is 2,150x total bet.

The game has five reels with four visible positions each and 178 virtual pay lines. Betting options range from 0.20 to 100 euro per spin. Like all of their games, it is optimized for delivery over whatever device it is played on from mobile phones to desk top computers - anything with an HTML5 capable browser (every modern device) will deliver the full experience.

The soundtrack is worthy of an Emmy, which is no surprise as ELK Studios was the first slot developer to offer a game soundtrack for sale on iTunes with the hugely successful DJ Wild slot.

Rather than spinning reels, the 5x4 grid is filled with 20 blocks falling in from above. After a winning spin, paying blocks fall to the bottom of the screen and the others are replaced with the potential of filling the entire screen with paying symbols. Scattered magnifying glasses trigger free spins.

Additional features include respins, sticky wilds, expanding symbols, and cascading win lines. One of the most exciting things that can happen in the game is to get three sticky wilds covering the 15 central reel positions guaranteeing massive wins across 178 connecting pay lines.

And for players who like to do more than set their stake and spin away, leaving their bankroll at the mercy of a slot machine's return to player percentage (RTP), the developers have built in ELK Studios' "Betting Strategies" module.

The feature can be turned on or off after any spin. Jumper raises your bet after a winning spin; Leveller will raise the bet 2 levels after 5 concurrent losses; Booster will raise your bet 1 level (up to 10x base) after every losing spin, and Optimizer changes your bet level automatically up or down based on the percentage of your balance that you choose.