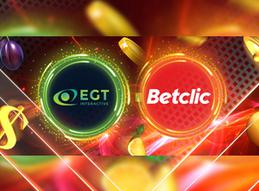 Leading casino content supplier, EGT Interactive, has continued to expand in European markets by singing a new content partnership with one of the largest operators in the region.

The operator in question is Betclic and this new agreement will see games from the developer become available across the operator’s network in markets such as Portugal, Sweden, and other .com regulated markets.

“We are delighted to sign this agreement with such a trusted and serious partner as Betclic Group. For the first time, our content is available for the Swedish players under Expekt brand and we are looking forward to a new jurisdiction under this partnership. Nevertheless, we continue our solid growth in the well- known Portuguese and Maltese regulated markets with Betclic Group following our goal for extensive distribution.”

“We are thrilled to broaden the offering of our brands with such a reputable provider with a long tradition in the land-based and superior online game offering. We are confident that their high-quality casino content will add further value to our players' experience. Expekt team is particularly proud to provide such a nice new slots titles to their Swedish market.”

The game development company and casino supplier has had a presence at the biggest gaming industry expo in the world for another consecutive year.

The company has showcased new titles and its concept of “on the go” play which is a synergy of land-based and online offerings.

They have also unveiled their newest take on the jackpot slot which is a distinctive game with a four-level bonus feature.

Egypt Quest contains familiar systems from the developer such as the four-tier mystery jackpot cards but adds new features to create a truly new igaming experience that will wow punter with innovation. The developer is promising high hit and retention rates, simpler and more user-friendly gameplay, and two different levels of winnings.

Irina Rusimova, Business Development Manager at the company commented on the new game and the G2E presentation by stressing how excited the developer is about the game as it has been one of their most successful in the land-based market and therefore it’s already known to the players.

She concluded that the release of this game is “a direct example of our greatest competitive advantage – the synergy we have with our land-based operations.”

EGT Interactive, short for Euro Gaming Technology, was founded in 2002 in Bulgaria and has quickly spread their offerings all around the world in various regulated markets.

Producing slots for both land-based and online operators, they produce advanced gambling software which powers some of the world’s leading casinos. Their games are based on a high RTP strategy which has been proven to increase player lifetime value.

Their portfolio has over 150 titles, and their games can be played in more than 85 countries.