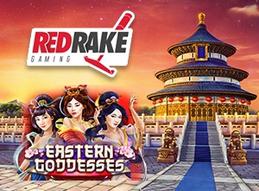 The Valencia, Spain based online casino game developer, Red Rake Gaming has released an HTML5 video slot under the title Eastern Goddesses. The company, established in 2011, already has more than 30 real money slot games in their portfolio along with more than 40 titles in their social casino line-up.

HTML5 For All Devices

By developing and deploying their games in HTML5 the company can reach a wider audience as the games come across just as well on a mobile device as they do on a desktop computer regardless of the native operating system.

Fire, Water, and Wind are the underlying powers of the three goddesses.  The Goddess of Water can flood the game reels with a waterfall of wilds and expands to fill the center reel with a single wild symbol. The Goddess of Fire also fills an entire reel and can multiply prizes up to 5x. More than one Goddess may also appear on the same spin.

Scatter symbols trigger a second screen bonus game wherein players choose from among 9 screens in an attempt to reveal matching elements to complete a goddess and win a number of free spins. Here, the Goddess of Wind will blow columns of wilds along the screen from right to left awarding a re-spin each time the filled reel or reels move across the screen. Re-spins continue until there are no more wild columns remaining.

The game is intensely colorful and highly animated with a well-executed soundtrack and sound effects that can mesmerize and excite depending on the mechanical dynamics in play at any given moment.

Red Rake deliver their games in multiple languages to over 100 countries. Their games can be found at several popular online casinos including Vera & John and Slots Millions.