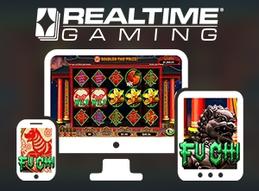 Realtime Gaming is set to release a new Asian-themed slot on January 17th under the title Fu Chi. The 3 position, 5 reel game with 50 pay lines has rich graphics and a pleasing soundtrack. The new game celebrates the Chinese Year of the Dog which begins on 16 February 2018 and ends on 4 February 2019. The Zodiacal year follows the Year of the Rooster, which was celebrated by RTG's release of Kung Fu Rooster several months ago. In about 2 weeks you will be able to find Fu Chi at Springbok and other RTG online casinos.  The current new game is Asgard which features progressively more valuable free spin rounds and 243 ways to win. That game was released Dec 13.

Lucky Dog Will Assist With Wins

Fu Chi, translated literally means to help or assist. The Lucky Dog symbol is wild and also stands in for scattered zodiac signs that trigger free spins with awards tripled. If the feature is triggered without the help of the wild symbol, the number of free spins is doubled. The feature can be retriggered during free games.  Three scatters award 15 free spins, four triggers 20 free games, and five award players with 30 free spins to start the feature.

Using a color scheme of red and gold with green accents along with a few midnight blue-on-black symbols makes the game a real eye catcher and the banging drums rev-up anticipation. Red denotes good luck, and gold signifies illumination, wisdom, and wealth. While the paytable hasn't been released yet, the top prize for a line win is expected to be 30,000x line bet during the feature game. There are also two in-game progressive random jackpots, a minor and a major that can fall on any spin, even for pennies.

The game can be accessed via download, instant play, and mobile beginning January 17.

A Year of Massive Wins

Daniel Van Wyke, Springbok Casino Manager said: "Luck is in the air at Springbok Casino in 2018, and we can’t wait to celebrate with some lucky winners spinning the reels on our latest game release, Fu Chi.

"It might be the Year of the Dog, but 2018 will also be the year of massive wins for our players, especially with 30,000x their line bet and two randomly triggered progressive jackpots up for grabs," according to a press release from the South African facing casino.