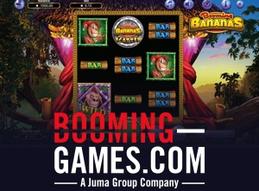 Booming Games is set to release a new slot on September 4 called Booming Bananas. The jungle-based game will join more than 50 game titles already developed and deployed by the international online casino game developer with headquarters in the Isle of Man and offices in Manila, Athens, London and elsewhere. Booming bananas, along with a host of other games from the developer will be available at Oshi Casino.

3D Graphics on a 3x3 Game Board

The 3D Booming Bananas slot is played on a 3x3 grid with 10 pay lines and 8 symbols on the reels. The graphics are superb, as they are on all of the developer's slots, conveying a true sense of place where players can get down to some serious monkey business. Symbols include bars and multi-bars, a mischevious monkey, wild gorilla, Booming Bananas scatter icon and more.

Wild symbols act as a sort of scatter themselves. When 3 or more appear anywhere on the reels a 2-Way Pay feature is activated. For the next ten spins after it activates the feature counts winning combination from left to right and right to left.

Three or more scatter symbols appearing anywhere on the game board will trigger 10 free spins. The most exciting feature of the game is a wild multiplier symbol that increases payouts by a factor of 7. Any winning combination on an active pay line that includes the multiplier symbol will be paid out at 7x the pay table stated value for the combination. There is also a 50/50 gamble game where you can go all in after a win for double or nothing.

The game maths show that most of a player's winning will occur during the base game with a 41% chance of any spin being a winner. The theoretical return to player percentage (RTP) is 96.55% giving the house an edge of 3.45% - which is great thanks to the volatility of slots compared to table games with much lower advantages.

If a player creates the "perfect storm" by triggering 2-Way Pays during a free spins bonus round and a winning spin contains multiplier symbols - the maximum result would be €24,220.00. Pay lines are variable, from 1-10 and coin denominations range from €0.01  to €10 each for a max bet of €100 per spin.

How Much to Bet Based on Game Maths

On average, free spins will come around once in every 106 spins. That's something good to keep in mind when deciding how much of your bankroll to bet on each spin. You can also expect to see the multiplier symbol once every fifteen spins on average. Of course, truly random games like these tested and certifies by iTech labs will have clumps of features and long spells in between - but over the course of play, those numbers will appear.