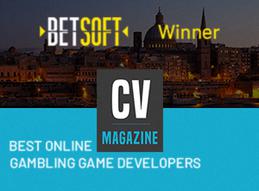 One of the industry leaders were picked for several notable reasons, with the main one being their long history of innovation. The judges' commentary on their achievements reads:

“Since the company’s inception in 2006, Betsoft have proven year-on-year that they are one of the leaders in the development of cinematic casino slot games. Their team of developers, engineers and animators help to produce some of the best 3D online games available today. This award-winning company has consistently developed new and innovative products which have proven to keep their customers engaged and coming back for more. As such, they are worthy winners of Best Online Gambling Game Developers 2019.”

How the Award Was Won:

Among Betsoft's innovative titles that earned them the prestigious title...

...are Max Quest: Wrath of Ra, an action-packed game that truly sparked a revolution in RNG gaming by replacing traditional slot symbols and reels with an interactive multi-player shoot'em up experience.

The game's objective takes players on a string of adventures while hunting for a treasure. They must shoot a barrage of mummified monsters and insects and try and win huge, random payouts. Max Quest: Wrath of Ra is a slot product that converges social and video gaming with an online casino.

Several weeks ago, Betsoft won the Best B2B Digital Product Solution award at the annual G2E Asia Awards in May. They were proclaimed winners for their expanding game portfolio, product development, and client support.

“The last year has been phenomenal for Betsoft with products such as Max Quest changing the way players interact with RNG games, alongside the launch of best performing additions to our portfolio of highly innovative, cinematic slots such as Spinfinity Man and Viking’s Voyage. We’re delighted to have won this award and its testament to all the hard work our entire team puts in every day and the milestones they have achieved in recent months.”

A Deal With Caliente:

In late May, Betsoft inked an agreement regarding content distribution with Caliente…

...which significantly expands their presence on the continent of Latin America. Their complete library of games will go live with this operator, which is one of the biggest in Mexico.

Nimrod Dvir, Head of Gaming at Caliente, has said of the agreement:

“We look forward to help grow Caliente’s player community even further with the addition of unique new content. We have recognized Betsoft as a leading slots games provider for a long time, and our team is passionate about making their games available to our players. Our goal is to offer world-class entertainment to Mexican players, which means securing partnerships with world-class providers who have a similar scale and vision to Caliente.”