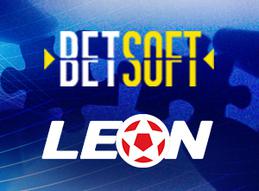 Casino supplier and game developer, Betsoft, has announced a continuation of the long-standing partnership with a Russian casino operator, Leonbets.

The operator in question is one of the biggest players on the Russian Federation market whose reach is felt throughout the CIS region and in Eastern Europe.

The two companies have established this partnership two years ago and during this time, Leonbets has featured Betsoft games and offered them a wide player base in Russia as well as throughout Eastern Europe.

The operator has boasted record-breaking revenues in recent years and it has attributed a large part of this success to their relationship with Betsoft.

“We’ve had a fantastic relationship with Leonbets ever since we began working with them. Today’s announcement is a natural progression of that work and one we’re very much looking forward to extending for many years to come.

“This year has seen us partner with some of the industry’s biggest names and we have plenty more to come.”

Under the terms of the renewed partnership, the casino will be able to offer stand-out games like Gold Diggers, It Came from Venus, and the EGR B2B Innovation award-winning title Max Quest: The Wrath of Ra.

Commenting on behalf of the operator, Casino Manager, Mr. Dmitry, has affirmed the commitment to the partnership stating that the company is “thrilled to extend this further to create a longstanding agreement.”

He has also praised the developer’s “new and exciting range of content will further strengthen our casino product and continue to enable us to differentiate from our competitors.”

A String of Important Partnerships:

The developer has been busy this year with some important partnerships being signed over the course of the last few months.

In July, they inked a deal with OGaming, a Malta-based operator who is the owner of the RioAposta online casino brand targeting the Brazilian market.

The LatAm market is significant for Betsoft…

…as they have also signed deals with the Mexican brand, Caliente, and also secured other deals that will help them penetrate the Colombian market.

Remaining within the Hispanophone sphere but on the European continent, the company has also signed a deal with Casino Gran Madrid whose online casino will gain access to Betsoft’s entire catalog thus helping the developer gain a foothold in the regulated Spanish market.

Blowing Up the Competition with Dynamite Gold:

The developer is not neglecting its game-making duties during all the business deals as it has recently announced Dynamite Gold, a fresh take on 5x3 slots where lucky punters can hope to win up to 4,000 times their stake.

This explosive offering is already live and available anywhere where Betsoft games can be played.