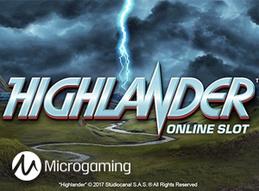 As promised in an October 2, 2017, announcement of a finalized licensing agreement, Microgaming has released their Highlander™ online video slot today (Wednesday).

The game is played on 5 reels with 3 visible positions each and has no traditional pay lines, rather, there are 243 ways to win on any spin. The slot is based on the 1986 movie of the same name, a cult classic that spawned a massive franchise of sequels and television shows, some of them featuring music written by Freddie Mercury and recorded by Queen.

There Can Be Only One

The game incorporates iconic characters from the movie that was directed by Russell Mulcahy.  Christopher Lambert starred as the immortal swordsman in the role of Connor MacLeod. He battles "The Kurgan", played by Clancy Brown to win the fabled prize of lasting immortality, as there can be only one Highlander.

Imagery in the base game is atmospheric, depicting the Scottish Highlands, circa 1536. When free spins are triggered the player is magically transported to New York City with an ominous stormy skyline and cityscape backdrop while the spins play out on a rooftop billboard.

The art style used for the game is reminiscent of the 1980s movie poster genre and the soundtrack smacks of electrifying period rock and roll, all synced up with features and other in-game activity.

Wilds are at the forefront of features with two separate mechanics. During the base game, two scatters will turn into wilds with a stroke of the sword, but the most exciting modification takes place in the free spins game that is triggered when three scatters appear at the end of a spin.

The menacing storm's ions intensify and lightning can strike at any time as the hair raises on your arms and chills course down your spine. When the thunderbolts attack, the reels become electrified and ordinary symbols turn wild. As tensions increase and more lightning strikes even more wild symbols will appear resulting in the possibility of stupendous wins with no traditional pay lines present to thwart a player's jackpot destiny. More than 100,000 credits can be won on a single paid spin.

Microgaming's Game Publisher, David Reynolds said: "Highlander is an iconic brand, and the game studio have worked tirelessly to create an online slot that pays homage to the 80s movie and its cult classic status. An epic soundtrack composed by our game studio is a great tribute to the brand.

"The features in the game perfectly represent the movie; the stroke of a sword which turns scatters wild in the base game is characterised by the legendary sword of the clan MacLeod, while Quickening Wilds™ in free spins is an escalating feature that builds the opportunity for players to win big!"

Creative Licensing Corp. assisted in the licensing deal between Microgaming and StudioCanal Group. CEO Rand Marlis commented: "The game came together exceptionally well. We are immensely pleased with the results and believe fans will love the art, which is a beautiful reflection of the classic film."

Microgaming Press Office, The game has arrived and the legend lives on: Microgaming’s Highlander™ online slot is live today 12-06-2017