Are you Ready to Shine in the Spotlight with The Smashing Biscuit’s Rocking Features from Microgaming? 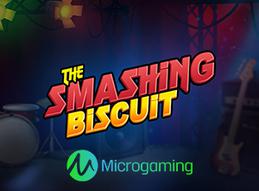 Developed by PearFiction Studios, here comes the Smashing Biscuits, a punk rock-themed creation to join Microgaming’s exclusive and blooming collection of casino slots. With a 5x3 grid and 20 paylines, this video slot features the three talented Biscuit brothers: Soggy, Crunchy and Tiny. The trio is hoping for a …

…shot at stardom and to grab a chance to stand in the spotlight. Representing an excellent mix of striking visuals and punk rock tunes, the title is equipped with thrilling features and mechanics. In addition to this, the title is now performing exclusively live on Microgaming’s platform.

Built around a guitar-designed amplifier, the show-stopping release boasts two unique gameplay features as part of the base game. The first one is a multiplier ladder, whereas the second one is represented as three different random Dad Bonuses. As the biscuit brothers rehearse for their upcoming competition, the multiplier meter increases and decreases. When Mr. Biscuit triggers the randomized Dad Bonus, he can crank up the multiplier dial…

…bring an instant win or help activate the Battle of the Bands extra spins mode. As the beat goes up and up, the title also has a set list of special symbols reserved for additional spins. When any of the brothers form part of a winning line, they become and remain wild for the rest of the complimentary rounds. If all three brothers transform at once, the crowd goes truly wild, raising the tempo even more.

Jagoda Barber, Head of Games at Microgaming, is certain that this newly-added title has plenty of refreshing and actionable content to offer. The most recent expansion of their catalog will certainly grow the base of studio’s followers. As she pointed out:

“We are delighted to add The Smashing Biscuit as the latest exclusive game to Microgaming. Bringing plenty of exhilarating excitement from the very first spin, The Smashing Biscuit offers an abundance of intuitive features, entertaining sound effects, and an engaging storyline, and is set to bring players on a rewarding journey.”

The times have been rather busy for the industry’s giant, as the team enhanced their fine catalog with two fantastic table games. Packed with a multitude of innovative options, those definitely level up the experience. Moreover, the team launched…

… its Dragon Shard slot, which introduced players to an unexplored universe with unusual creatures as inhabitants. Joining forces with Stormcraft Studios, they delivered a 5x5 video game of uniquely beautiful visuals and highly-inventive mechanics.