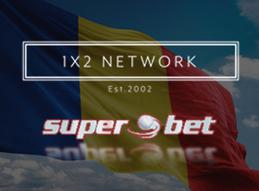 Another slot and casino game supplier has teamed up with Romanian powerhouse operator, Superbet.ro, to enter the highly attractive regulated igaming market in the country.

1x2 Network, the force behind studios 1x2Gaming and Iron Dog, is now poised to bring over its portfolio of offerings across the entire Superbet.ro network of brands and sites.

Punters in Romania will now gain access to games from the aggregator’s catalog including Rainbow Wilds, Santa 3x3, and Neon Fruit.

“We are thrilled to have entered the Romanian market for the first time with Superbet.ro. This deal further signifies our constant development in regulated markets around the world and the diverse portfolio that we have to offer showing we can enter many markets.”

Samuel Lewis, Business Development Manager, added: “We are particularly pleased that Superbet.ro will be offering our content to its players. They are the biggest sportsbook brand in the country and have a large, loyal player base that can now access our games. We believe it a testament to the quality of our titles and their popularity with players that such an industry giant in the region was so eager to work with us.”

Commenting for the casino operator…

…Head of Online Gaming, Heather Faulkner, stated the company is looking forward to a long and successful partnership and that the developer’s titles will be a bit hit with their players. She added that the company’s strategy is about growing their casino offering and adding 1x2 Network’s content will help them achieve this.

The partnership with the Romanian operator is just one of many for this content aggregator which has previously entered a deal with Global Gaming, the Sweden-based casino and sportsbook operator. This deal lets them access the hugely important and lucrative regulated Swedish gambling market that many companies are vying over.

And this month, the company has also partnered with Germany’s Gamomat, the online and land-based slot manufacturer and developer, to integrate their content into the network alongside with their in-house studious and an impressive roster of other third-party developers.

The company has also struck a deal with Italy’s E-Play24 in late August to bolster their position on the Italian iGaming market.

The independent software company was founded in 2002 and is based in the UK. They also operate a content aggregation platform 3PI which features content from a selection of third-party vendors.

The group is at the forefront of mobile-first development and has a varied portfolio of sports games, table games, and slots.