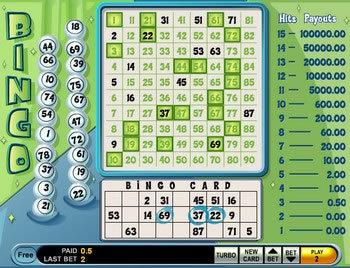 Bingo Keno by WagerWorks has one randomly-configured 90-ball bingo card, the option to switch out that card, and 15 numbers chosen randomly for you. Win all 15 numbers and get up to 500,000 credits!

Bingo a popular game where players choose their 75 or 90-ball cards to wager on and random numbers appear to fill that card or cards.

In the Bingo Keno online game you do not have the control of picking individual numbers as you would in keno, but rather the option of picking a new card of randomly-generated numbers.

The playfield pay table for online Bingo Keno, using WagerWorks software, lists the awards for matches; from 1 out of 15, up to 15 out of 15, is based on the player’s current wager amount of 1 to 10 credits, and the possible top payout of 500,000 credits!

To start the Bingo Keno game you first choose to keep your current bingo keno card, or select the "New Card" button to replace it with a randomly-numbered new card. Next you will place your wager amount and then select the Play button.

Next, twenty bingo balls are presented in online Bingo Keno, and then the paying outcome will be based on the number of matches that occur between your cards, and the randomly presented number matches on that card. You may also choose to use the same keno bingo card, game after game, if you prefer.

Play both types of games in Bingo Keno online at your favorite WagerWorks casino! 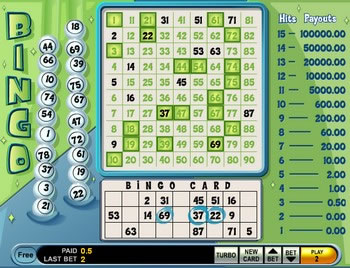