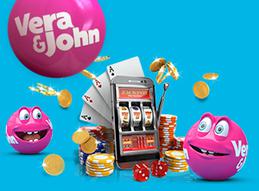 From May 1, 2017 through May 13, 2017, there are three different jackpots being paid out worth a total of $30,000,000. Since 1956, the Eurovision Song Contest has been a thing with super-talented performers showing up to sing and entertain. You can vote for the first semi-final until May 9, and you can vote for the second semi-final until May 11. On May 12 and May 13, you'll have the opportunity to vote for the finalists. If you guess the finalist in these rounds, you'll have a chance to win as much as $10,000,000.

The Eurovision contest is essentially one of the largest-scale talent contests ever to run in the entire world, and Vera&John Casino is giving players a chance to get a piece of a huge payout just for guessing the right winners on semi-finals and finals. You'll be able to purchase Millions Tickets for this promotion for each of your guesses, and the more you guess, the more opportunities you have to win.

This is a tremendous prize pool that's up there with the largest promotions that we have ever seen in the industry as a whole. There will be a ton of players taking part in this event, and you can still get a sizable win in spite of that because of how overwhelmingly large the prize pool is overall. You'll have a couple of weeks from the beginning of the month to get in on the action, and that gives players plenty of time to use their Millions tickets to get a piece of the action.

Despite the name being a bit different, this is a very solid online casino. They have a great selection of online slots thanks to the Microgaming Quickfire, Net Entertainment and BetSoft software they use. They've been in operation since 2011, and they are always putting on cool promotions. Vera&John's Millions is just another example of how they are always giving players chances to run up some major winnings between their special offers and game selection. Overall, this is a very solid place to play, and now is the time to try them out to get a piece of the prize pool in this promotion.