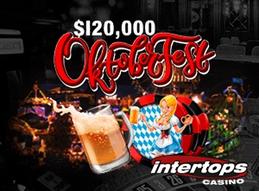 Three hundred players every week will win up to $500 each as Intertops rolls out another casino-wide bonus competition. In Munich, over six million residents and visitors are expected to raise their steins beginning September 16 this year and they'll keep rolling out the barrels until October 3, when more than 7 million liters of bier have been put to the proper use.

“You don’t need a dirndl or lederhosen to enjoy the party,” said Intertops’ casino manager. “We’re bringing the fun of Germany’s annual beerfest to YOU!”

Although now held in other cities across Germany and beyond, the original "Wiesn" was held in 1810 to celebrate the marriage of the Bavarian Crown Prince, Ludwig. Locals still refer to the 16-18 day volkfest as Oktoberfest, but among themselves it is usually refered to as Wiesn after the fairgrounds where it is held, Theresa's Fields (Theresienwiese). The folk festival starts a little earlier in the year nowadays to take advantage of the warmer late summer evenings.

Intertops Casino is getting a jump on the festivities this year by awarding frequent players with $30,000 in casino bonuses every week until October 2. Players don't need to buy raffle tickets to participate because points are earned simply by playing one of the hundreds of RTG games on offer at the casino. Players earn points whether they download the casino or play instant games on desktop, laptop, mobile, smartphone, or tablet.

Competition among players can get pretty intense because moving up or down a few points on the Scoreboard can mean hundreds of dollars of difference in the bonus prizes awarded.

Even if you don't play enough to climb die leiter far, there are weekly random draws worth $5,000 each that any player can win. All players that make it into the top twenty, any week of the competition will be entered into a final draw for a $1,000 cash prize rather than bonus money with wagering requirements attached.

A direct link to Intertops Casino is available here. Alternately, new players can get familiar with the "grand old man" of online gambling by reading a review. Keep your eye out for the release of a new video slot called Dragon Orb later this month. The game will feature ten variable pay lines that pay both directions and a random jackpot. This will be a highly volatile game with wild re-spins that pay up to 250x your initial bet.