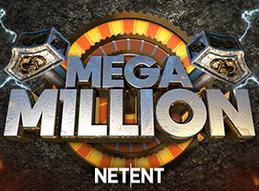 The World Cup is coming up this summer, and Net Entertainment has a major bonus campaign that's coming along with it. Their Mega Million campaign is giving away a lot of cash during this summer, and it'll go from June 14 to June 15, 2018. This is an exciting promotion that many players will want to be a part of because it can be your chance to win a piece of a tremendous prize pool.

Two Parts to the Promotion

There are two different parts to this overall promotion. The first part centers around €3,800 that's being given away for each World Cup game, and this comes to a total of €95,000 for this part of the campaign. The second part adds extra money to the mega jackpots for their Hall of Gods and Mega Fortune slots, the two biggest progressive games that they have available. This is a cool way to add value to gameplay that we haven't seen a software developer do before.

A number of features have already been announced by this company for the biggest soccer/football tournament in the world. One of these is their Sports Betting Widget for live casino play, and that will allow players to enjoy sports betting while they sit and play their favorite live casino titles, which is something that you can do in a land-based casino that's been missing from the online sector for quite a while. You can even watch the games live while you play roulette with their World Cup LIve feature as well.

Innovation and Value from Net Entertainment

One of the things that NetEnt has always brought to the table that has helped to get them to the insane level of popularity that they are at now is to always provide players with value in their experience. They've added to that over and over, and now you can see them giving away more than €1 million in this World Cup giveaway promotion. This is on top of the value that they give from their biggest jackpots making several millionaires each year, which include Hall of Gods and Mega Fortune, the two games involved in this event.