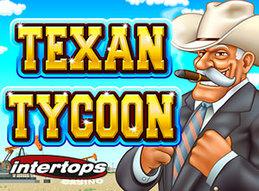 There has been big news lately of ExxonMobil, an oil industry juggernaut, committing a total investment of eleven figures into building oil refineries along the Gulf Coast of the United States over the next decade. They claim that over 45,000 total jobs are going to be created as a result, which is obviously great for the economy. However, Intertops Casino is offering players their own way to get paid with the Texan Tycoon video slot and some solid promotions.

How to Get Paid With Intertops Casino Bonuses

You can get a 100 percent match bonus worth as much as $500 whenever you use the TYCOON promotional code, and that comes along with 50 free spins as well. This is on top of their selection of regular deals that you can get all the time, and you can tell that they're all about giving players casino bonuses on pretty much every deposit they make.

Texan Tycoon is a video slot available at Intertops Casino, and it's particularly relevant right now because of its oil tycoon theme. Since it is also set on the Gulf Coast, it's a perfect fit for what's going on right now with ExxonMobil's plans for the next decade in the area. This slot uses five reels, three rows and 25 paylines, and it has several ways for players to get paid in both the regular game and the bonus feature. The game has a high volatility as a whole, and that means that its top-heavy pay table is great for players who are looking to strike their own big score.

As one of the oldest online casinos running today, Intertops was first launched way back in 1996, giving them more than two decades of experience. They use software from both Realtime Gaming and WGS Technology, and they are licensed for operation from the Kahnawake Gaming Commission. They've been giving players great opportunities for promotions on a regular basis for several years, and they have a very solid selection of games like Texan Tycoon. Come get in on the action now for your own chance to strike it rich with virtual oil.