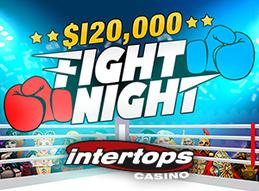 Intertops Casino is known for running a lot of big promotions, and their latest is just another example of that. With the $120,000 Fight Night Casino Bonus Giveaway, players will be able to get a piece of the action every week until the event ends on July 10. It's a pretty big deal right now because $30,000 in payouts are being given away every week until this promotion ends.

When you play real money games at this casino, you'll get bonuses worth up to $500 if you're in the top 300 in terms of total points each week on the leaderboard. A total of $30,000 is being given away weekly, but $5,000 of it is given away at random to players who got in on the action from Monday to Wednesday each week. This helps to spread the money around a bit and give players more options to get paid as a part of this promotion.

If you make it to the top 20 of any of the weekly leaderboards, then you are entered into the main event at the end of the promotion. An extra $1,000 cash prize is being given away in a random drawing to everyone who makes it to the top 20 of the weekly leaderboard competitions, and it's a great way to add even more value since it's a cash prize instead of a casino bonus. There are tons of ways to win in this event, and they've made it easy to cash in and get a piece of the action without having to change your playing habits at all.

Intertops Casino was one of the first online casinos, and it's one of the oldest that is still around. They have kept up with the times, however, and they have a recently renovated mobile and instant play option that allows you to get in on the action with all of your favorite games. They have an excellent combination of a strong game selection and some of the best promotions that you'll find anywhere, so it's safe to say they are still a massively competitive force in the industry despite having been around for so long.

Press Release, The Gloves Are Off During $120,000 Fight Night Casino Bonus Championship at Intertops intertops.eu, June 13, 2017