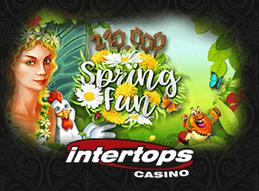 It's been 20 years since Intertops Casino first opened their doors, and they're giving players a lot of reasons to be happy about that with their $210,000 Spring Fun bonus promotion. Players will have a few different ways to get in on the action and compete against each other for serious prizes. This promotion runs through April 23, 2018, so you have plenty of time to use your opportunities to try to win.

The Basics of This Promotion

On the most basic level, this promotion starts out with points-based competitions that run each week. First place in these individual leaderboard competitions will get $500, and a number of other prizes are awarded as well. You can earn points on all real money play, no matter if you're playing on desktop or mobile. However, you don't have to be super competitive to still have a chance to win in this promotion.

That's because the $210,000 Spring Fun event is giving players chances to win in random drawing as well. There's a $2,000 drawing for their 20th anniversary coming up later this week, and there's also a $1,000 cash drawing at the end of the promotion for anyone who won an individual weekly prize. As you can see, there are plenty of ways to win in this promotion, and it's basically extra value for playing games that you would have been playing anyway, which is the best kind of promotion out there. Terms and conditions apply to this promotion and any bonuses you get from it.

Back in 1996, Intertops took the very first online sports bet in the world. They later opened their online casino in April of 1998, and now we're on their 20th anniversary. It's pretty cool that this brand is around after all that time, and they still accept players from all over the world with a real international appeal. This comes from their longevity in the industry along with how trustworthy they have proven themselves to be over two decades of service. Add in great promotions like this Spring Fun event with its $210,000 prize pool and multiple ways to win, and you get an online location that gives players lots of reasons to be loyal.